As AMD promised, the AM4 socket has been very long-lived with over five years of service. By now it has been home to as many as five processor architectures.

AM5 enables PCIe Gen5 and DDR5

As of the second half of 2022, however, the old socket reaches the end of the road. Along with AMD’s launch of the Ryzen 7000-series processors, which will support PCI Express 5.0 and DDR5, the new socket AM5 will be introduced.

At Computex 2022, AMD revealed the new socket and its accompanying motherboard chipsets in a lot more detail than was previously known.

Moving to socket AM5 means that AMD will decommission the conventional pin grid array (PGA grid) in favor of land grid array (LGA). What this means is that the CPU pins are no longer located on the processor, but rather in the socket itself.

The AM5 socket has 1,718 pins in total, which is about 30% more than AM4. The additional pins are necessary to accommodate the DDR5 memory standard and the high-speed PCI Express 5.0 interface. Additionally, the new socket should be able to handle additional power delivery to the Ryzen 7000 processors with TDP values ​​up to 170W.

AM4 coolers to be compatible with AM5

An additional selling point for AMD’s upcoming platform is that a lot of effort has gone into keeping the physical dimensions of AM5 in line with AM4. As a result, existing AMD coolers can be more or less seamlessly moved over to AM5 motherboards. No new mounting parts should be necessary. 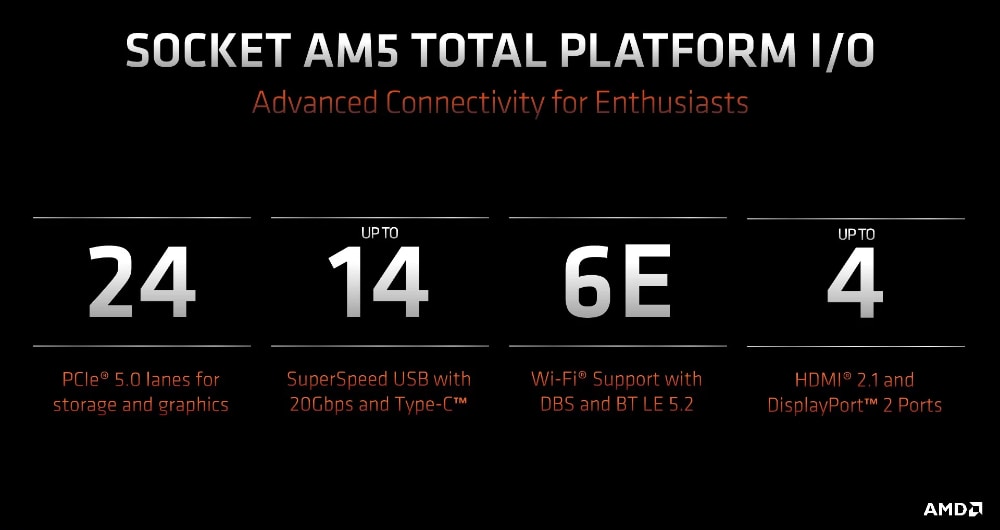 AM5 offers a total of 24 PCI Express 5.0 lanes directly from the processor, the utilization of which will vary with the chipset and the motherboard manufacturer’s design choices.

Additionally, you get support for up to 14 USB 3.2 Gen 2 ports, and Wifi 6E should be widely available with upcoming motherboards. The Ryzen 7000 series comes with integrated RDNA 2 graphics, making it possible to include up to four Displayport 2.0 or HDMI 2.1 ports.

Along with the new socket, AMD introduces three new chipsets known as X670 Extreme, X670 and B650. Several manufacturers, Asus among them, have already announced products based on the new chipsets. 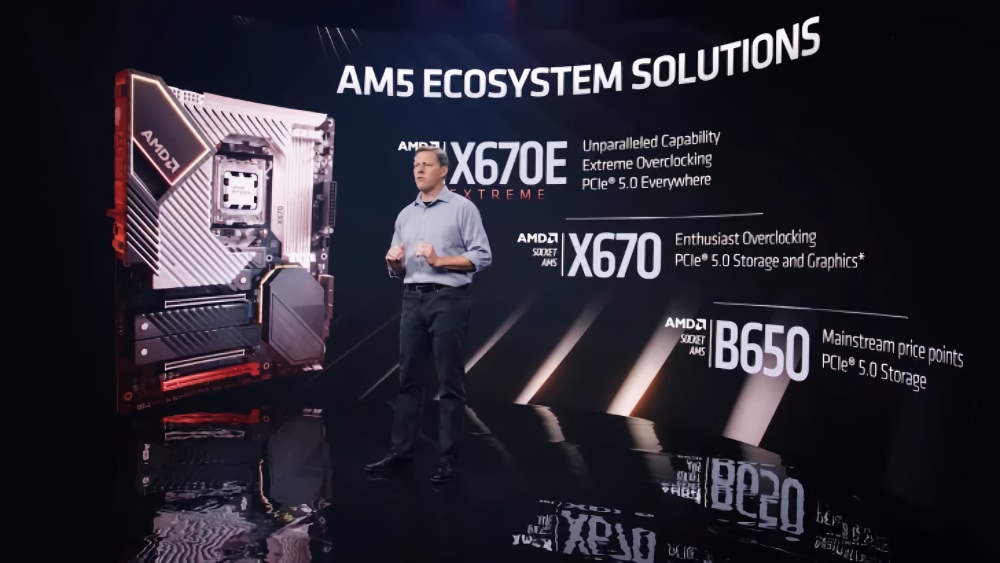 Like its B550 predecessor, the B650 is targeted at the mainstream with PCI Express 5.0 support limited to one of the M.2 SSD storage slots. Graphics cards and other add-in cards will be limited to PCI Express 4.0.

One step up is the X670 chipset, which adds PCI Express 5.0 lanes to the primary GPU slot as well as an M.2 slot. It is however up to the motherboard manufacturer to configure the board with primary PCI Gen5 support. For cost reasons, and considering the often minimal performance gains, some are likely to stick with Gen4 for the GPU slot.

As for the high-end X670 Extreme, this chipset, unsurprisingly, offers the most capable PCIe 5 connectivity options. This includes additional M.2 storage and up to two graphics card slots. X670 Extreme motherboards are also likely to offer the best VRM components targeted at overclocking aficionados.

At the launch event, AMD also announced that they are working with SSD manufacturers to develop ultra-fast NVME devices based on PCIe Gen5 ahead of the Ryzen 7000 launch. One of them is Phison, whose latest E26 controller will shortly arrive from partner manufacturers such as Asus, Gigabyte, and Corsair. AMD promises storage performance improvements of at least 60% in combination with PCI Gen5.