AMD will launch its new Navi architecture this summer, along with new Ryzen CPUs. Now the official graphics drivers confirm the existence of the upcoming Radeon RX 600 series.

This summer, AMD is preparing for a big launch in both the GPU and CPU sectors. The all-new processor series Ryzen 3000 with the Zen 2 architecture – and up to 16 cores on the AM4 socket – is flanked by the graphics architecture Navi, which takes the step down to 7 nanometers to take up the fight against Nvidia’s latest Turing launches.

While the naming of the new graphics card series is still shrouded in obscurity, a first indication can be found in nothing less than AMD’s own drivers. The new names indicate low-end cards by the names Radeon RX 640 and Radeon 630, which thus become part of the as yet unknown Radeon RX 600 series.

The discovery was made by a user on Techpowerup’s forum and the driver in question is Radeon 19.4.3. The software’s INF file reveals that the GPU duo has similar Device IDs as the Radeon RX 550X and the RX 540X, which indicates that in both cases they may be simple rebadges, something that both Nvidia and AMD are known for, unfortunately. 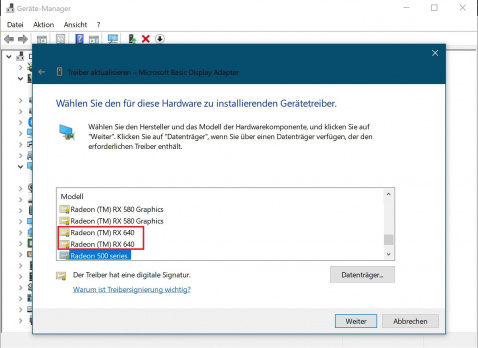 Both are based on a later iteration of the Lexa circuit called Polaris 23, which is AMD’s lowest segmented part of the Polaris family. In the standard version, it is equipped with 640 stream processors, a 128-bit memory bus and either 2 or 4 GB of GDDR5. The process is 14 nanometers.

It has been rumored that graphics cards built around the Navi architecture would be called Radeon RX 3000. This has not yet been confirmed, but it is possible that this will be the case and that the Radeon RX 600 series is used for lower segments or only the OEM market.

The fact that new(ish) graphics cards are represented in AMD’s official drivers suggests that the launch of these and perhaps the entire Radeon RX 600 series is imminent. All that we actually know yet is that AMD confirmed that the Navi architecture is to be released during the third quarter of 2019.